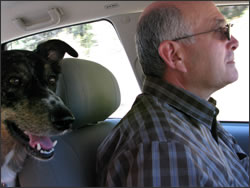 It wasn’t easy being a dog on the run. But one day, when life was oh so rough, somebody came to my rescue. I must have been quite a sight and in some human’s estimation a bit too much to handle. Thankfully, people who truly cared didn’t give up on me. In fact, I was taken to live with guys who actually dwell behind bars. Yes, they call these men prisoners, or inmates. They live in the "big house". They gave me the attention I needed, taught me some dog gone manners. And before I knew it, they considered me rehabilitated.

One day the men who live behind the great big high razor topped fence told me it was time for me to go. A nice family came and picked me up. They knew all about dogs and forever homes and knew I had some ruff stuff baggage to deal with.

My new friends had this look in their eyes like they needed me, so I decided to "rescue" them. I got to ride in their car and went to live in their house. It was a new experience being a member of a real family, and I had so many things to learn. But now I am happy to report that this inmate trained pup is doing great. Thanks to the prisoners who trained me, and the rescue shelter that saved me (Second Chance Animal Shelter), I am experiencing a happy and healthy life – Yes It’s a Dog’s Life – and it’s GREAT!. We are excited to see our Rescue Animal story featured in FidoandWino.com as R.O.A.R. Squad members from the State of Idaho.

The R.O.A.R. Squad (Rescue Owners are Rockin) is the ingenious idea of a lady named Shauna who lives in a great smelling country, our neighbor to the north, Canada. She has a couple lovable canines in her family, and has first hand experience in compassion for pets that have found themselves as outcasts in society, "throw aways". Shauna had this terrific idea to encourage humans to help us non-humans (some people call us pets) by inviting a rescue animal into your family and giving it a forever home. She created an awesome blog that features Rescue Owners and their rescued animals from every province in Canada and every state in the USA. We think that is DROOLIN COOL!

So wag your tail and jump on over to the FidoandWino Blog, say hello to Shauna, John, Mickey and Kayloo. While you’re at it check out the article about our family. Julie, Murry and Maggie – R.O.A.R. Squad Members from Idaho. In honor of their 15th birthday, Petfinder is asking people everywhere to pledge to spread the word online about adoptable pets on March 15, 2011. Even if you don’t have a website or blog, you can still be a part of this and show your support. Tell your friends on facebook and twitter. Check out their website.

Pat McNeely and his dog Koda of Johns Creek, Georgia are going to have a blast in their new community dog park. Pat created a fantastic video to share his vision of a dream dog park presented as a family destination for dog adventures. Oh how we wish you lived here in beautiful Boise, Idaho. But alas, Pat lives in Georgia. Kind of far away from Idaho.

You know if Beneful really wanted to make a statement to the people who are into college sports, you could also create a dog park here in Boise and make the grass blue. 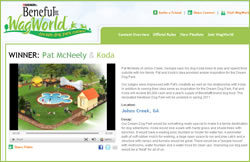 What do pet owners say when they have to give up their dog to the dog pound? The Apology Video tells the story.

Please please please consider all aspects of owning a pet before you decide to make them an addition to your life and family. Our pets depend on us, the decisions we make affect our pets.

My name is Firefighter Dayna Hilton and I would love to share the amazing story on the DogBlog of how my four-legged friend, Sparkles the Fire Safety Dog (rescued from a home with 62 other dogs), has been able to help reach millions of children and their caregivers with the fire safety message.

To date, Sparkles has helped save the lives of two children and their two families. (http://www.sparklesthefiresafetydog.com/saves

We put a video about Sparkles for children on her blog at http://sparklesthefiresafetydog.blogspot.com/2009/12/new-sparkles-fire-safety-dog-video.html  that you are welcome to watch. 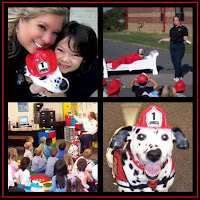 Five year old Angelica shared her story with me, Firefighter Dayna ~ "I was in bed under the ‘cobers’ and the smoke came. I crawled out of bed and crawled low, just like Sparkles [the Fire Safety Dog] showed me to. I said, ‘C’mon daddy, you have to get on the floor and crawl low like Sparkles."

By this time, her dad was disoriented because he had been standing in the smoke filled room and thankfully he was able to follow Angelica out of the house. The brave firefighters later shared with me that Angelica’s father followed her out of the home and they said that as soon as he reached the door, they scooped him up and took him to the hospital (where he spent 7 days there ~ 4 in ICU). Immediately after they carried him away from the front door, the firefighters stated that the home flashed over (a "flashover" is where the home totally becomes engulfed in flames).

A day doesn’t go by where I don’t think of Angelica and her story and I am so thankful that she and her dad are safe.

Sparkles and I do what we do, not for financial gain, but to help keep children, like Angelica, fire safe. Every fiber of our being goes to help spread the fire safety message.

Sparkles is busy dog, sharing the fire safety message on her

Sparkles has truly found her calling and I am so grateful that she is in my life.

—
Exciting News! Sparkles the Fire Safety Dog featured in the July issue of Cesar Millan’s (the Dog Whisperer) Cesar’s Way Magazine! A moving, heartwarming story about Sparkles’ journey by Rick Markham, complete with fire safety tips for you and your family. Pick up your copy today!

“We love you, Sparkles!” has been echoed by thousands of young children since Sparkles became a fire safety dog in May 2003. Sparkles was adopted by Firefighter Dayna and led a challenging life, as she was rescued from a home with 62 other dogs.

An invaluable member of the fire service, Sparkles has helped spread the fire safety message through her fire department and the Keep Kids Fire Safe Foundation, reaching millions of children and their caregivers. To date, Sparkles has been credited with saving the lives of two families.