Dog breeds can be categorized according to their function, size, and shape and throughout the years, over 300 dog breeds have been listed down. Apart from a few working dog breeds, statistics have actually shown that dog breeds have only emerged over the last hundred years. The reason why this happened is because dogs were bred in order to get a desired result such as getting the wanted size, shape, physical abilities and many others and this encompasses the physical appearance but also their temperaments. Dogs like the German Shepherds, Rottweiler, Doberman Pinschers and many others were bred because of their hunting capabilities and also their general temperament that makes them great guard dogs.

The aforementioned dogs are also coincidentally the breeds that many insurance companies have considered to be blacklisted because of the risks that they entail. Certainly this logic is not unfounded but reputation that these dogs have garnered that they are terrifying aggressive have colored people’s perception on them and more often than not, in a very unhealthy way.

Indeed, the way these types of dogs were bred have a certain genetic inclination to become more territorial thus showing more aggressive behaviors but the way they are brought up should also be taken into consideration. Despite their reputation, the aforementioned dogs along with others such as the Akita, Great Danes, Alaskan Malamutes, Siberian Huskies and others are great companions and family dogs.

With that in mind, would using a shock collar for inherently territorial dogs be ideal?

Before they had the more sophisticated version that we now know today, shock collars have actually been around since the 1960’s and used to train hunting dogs. They were used to deter unwanted behavior such as excessive barking and also training dogs to stay within properly lines, most especially in farm areas.

Over the years, the shock collar or sometimes called the e-collar has created a great divide among pet parents and also experts. The negative view on collars stems from the idea these are “torture” devices designed to cause pain and at some point submit your dog to obedience. People who are against the usage of the device prefer non-chock methods.

On the other hand, people who approve of the shock collar, may it be experts and regular pet owners believe that it is a great tool for training. Even the famous dog whisperer, Cesar Millan, has approved the use of the collar.

On a more personal note, the results of using the shock collar is fairly evident. Granted that it is used properly, it is a great training tool. But, if a pet owner does not know how to use the device, it will bring unwanted consequences for your dog. Overall, it depends on how it is utilized and if it’s utilized in the right way. END_OF_DOCUMENT_TOKEN_TO_BE_REPLACED

Dog’s Speak Up for Collar Safety 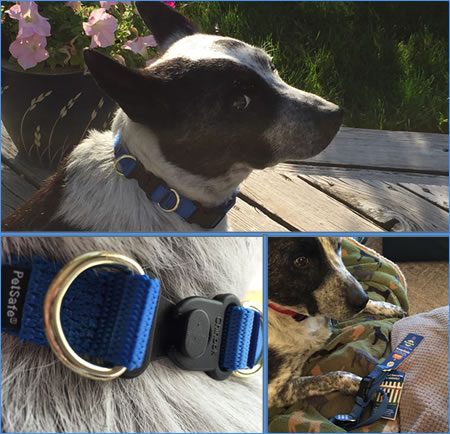 My family wanted me to talk to you about a very serious issue. Today my mom gave me a new collar. She said that this could actually save my life. What is so special about my new collar? It has a feature that makes it come apart if I get my collar caught, so I don’t get strangled. My new collar is a PetSafe® KeepSafe® Break-Away Collar.  Isn’t it pretty.  I really like it.  My mom listened to a video interview from the women who created it.  She invented this collar after she lost her dog Chinook, to a collar strangulation accident.  How terrible!  You can see the video below.

The collar features a patented break-away safety buckle that releases when pressure is applied or it gets caught on something, allowing it to fall off harmlessly and reduce the risk of strangulation or injury to the pet. The KeepSafe collar also has a metal D-ring on each side of the breakaway buckle, which can be used to attach ID tags and can also be clipped together with a leash so pet parents can safely walk their dogs using the collar.

We didn’t even know that this was a risk, but my mom heard about the Educational Campaign to Protect Pets from Collar Strangulation Accidents . They call it Collar Safety Awareness Week. We think everyone should help get out the word. Mom said it is urgent to make everyone aware of this safety issue. So listen up, people. Please pass this along. I know your dog will thank you.

The first annual Collar Safety Awareness Week, October 18-24, 2015, is being launched to educate the public about the risks of strangulation and dangers of traditional collars as part of National Animal Safety and Protection Month.

Blue Belle’s Message to All Dogs and Their Family’s PROTECT YOUR PET WITH A SAFE COLLAR.