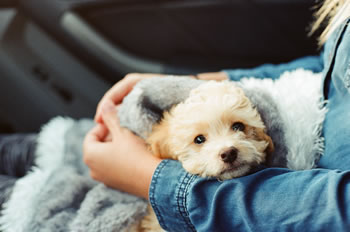 Photo by Andy Omvik on Unsplash

For many dog lovers, as the snowflakes begin to fall and the temperatures outside reach gelid lows, few things appeal more than snuggling up to our beloved pooch, ‘naughtily’ allowing the little gremlin to burrow under the blanket on occasion. There seems to be plenty of conflicting information when it comes to allowing access to bedrooms for dogs; on the one hand, we know that having pets can actually help keep allergies at bay and boost children’s immunity. Pets also wield important benefits to our mental health. On other hand, it is not uncommon to read warnings about the ‘dangers’ of allowing our dogs to get too close.

Early studies (such as one Mayo Clinic study carried out in 2002) found that of 300 people surveyed, 60% had pets who slept in the bedroom; in the latter group, there was a 57% chance that the dog would sleep on the bed. The study found that 53% of participants had sleep disruptions caused by movement in the bed, pets snoring, and whimpering.

In 2012, the Mayo Clinic repeated this survey, finding that around 20% of those who slept with a pet in their bedroom or bed said their sleep was disturbed by their pets. However, 41% felt that their pets helped them sleep better.

The Mayo Clinic finally conducted their own study in 2017, tracking 40 participants via activity trackers. The findings were clear: while those who actually let the dog in the bed had less quality sleep, yet when dogs slept in the room (but not on the bed), their owners actually slept better! The conclusion is that there is no need to miss out on the treat of having your dog nearby.

One recent article published in Human Nature (June, 2017), found that around half of all pet owners share their beds or bedrooms with their dogs or cats. The researchers noted that the apprehension of co-sleeping should be set aside, because this practise has important psychological benefits. Sleeping with pets, as with children or other family members, is not new; in the Europe of the middle ages, for instance, communal sleeping was a way to increase security, conserve resources, and create warmth. Many people also find that the sense of companionship merits the occasional disturbance from their four-pawed friend. Dogs tend to adapt well to human sleeping patterns, and we quickly grow accustomed to their habits as well.

Does Close Proximity to a Dog Actually have Dangers?

In 2011, the Centers for Disease Control and Prevention found that sleeping with pets is usually harmless; it is best, however, to avoid letting Fido lick our mouth, so we can keep any possible zoonotic contagion at bay. Risks can be kept to a minimum by changing sheets frequently, ensuring our dog is well groomed, and vacuuming shared spaces.

Interestingly, one study found that “dogs are not likely to spread multiple drug-resistant E. coli to their owners, but perhaps owners may spread them to their dogs.” The findings make sense considering that human beings take more antibiotics than dogs do, which affects the bacteria in our gastrointestinal tract.

There is always a small risk of being negatively affected by close proximity to animals, but science indicates that the risk does not seem to be significant enough to forego the benefits of co-sleeping with our pooch. As our pets grow older and more vulnerable, sleeping near them can increase their security and ours. The one piece of advice scientists give, is to let your pooch sleep in his own bed, but to those who love the warmth of their dog by their side, take heart: rules were meant to be broken.